Going Down to the Water 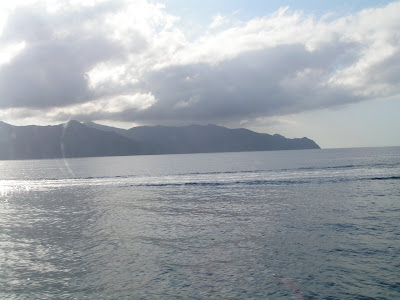 I usually don't come up with anything to write until after three in the afternoon, but this is one of those very rare moments when I have the house to myself. So I ran around in circles for a few minutes, and ended up right back at the computer. Go figure. Ricky Raccoon mentioned surfing this morning. I think about surfing a lot even though I haven't been in the water for over twenty years. Partly, I think on it in connection with lost youth and all that sort of depressing stuff. Partly I remember the fun. Or the fear. The fear is one of those things that is impossible to convey to someone who hasn't experienced it. I can easily write, "Ten Foot Wave", and even capitalize the words for emphasis, but if you haven't been on your belly trying desperately to scratch over the top of one, it doesn't really register. It's the slow panic of the nightmare where something is after you, and your feet are mired in glue, your body moving in slow motion, the implacable monster gaining on you with each strained step. Only you don't have the luxury of waking up safe in bed. Every surfer gets in that spot at least once- paddling out, and then realizing that you've bitten off way more than you can chew, and there's no way out except through it. It's one of those experiences that stays with you, and never fades with time. I never had the courage to be a big wave rider. 6'-8' was my limit. One time when I was at the top of my game I went for it on a solid 10' day, but that was it. I have been out in bigger surf, but I haired out, and couldn't make myself go for it. I was glad to just get out of there alive.
Every time I go down to Huntington I go out on the pier and watch. I see quite a few guys my age and older out in the water. I get tempted, but not tempted enough to borrow or rent a board and wetsuit.
A couple of years ago, December of '06, Mary and I were house sitting for a friend of hers. They live in Newport Beach, right next door to Huntington. I remember being cranky about going down there. I was still getting over the heart thang. Taking pills every morning was new, and slightly horrifying. Carrying the little steel container of nitroglycerin was just creepy. I was on an emotional high wire. It didn't take much of an upset for me to be scratching for balance. I was weak physically, and worried about money. Spending a few days at the beach house seemed like a luxury we just could not afford. I didn't want to go. But I did.
I got down there in the late afternoon, and immediately had to go across the street to River Jetties, and check the surf. Instinct. It was flat, windblown. Nobody out. Nothing to see. And I was still weak enough that I felt the short walk across Coast Highway, and the beach. I was a stranger there- some sick old fart from twenty miles inland who didn't even bother to take his shoes off while walking in the sand. A friend had turned me on to a couple of buds. There was no one around so I hunched down out of the wind, and took a tweet, but a bite on the pipe only deepened the feelings of estrangement and loss. We had Italian food for dinner, and then made love for the first time since I got out of the hospital. It was good.
The next morning we drove down to Huntington pier. A swell had risen overnight. The winter morning was hazy, but not uncomfortably cool. The ocean stretched out like a great sheet of deep green glass, and 4'-6' waves rolled in, and peaked up in A-frames on both sides of the pier. It was as good as Huntington gets. I went from one side of the pier to the other watching the sets roll in, and watching people pick them off for long slides in both directions. I noticed guys my age out there, too. It looked so easy. But I knew what those swells would look like from flat on your belly, and I knew it wasn't as easy as it looked. I was looking at something that was behind me. Something that was once mine, but now belonged to someone else. But as I watched from the railing, some twenty feet above the water, I knew it was OK to be where I was; realized I was OK with it. It felt sad, but it was that sweet sadness of the inevitable ending of all things. I held Mary tight, and lost a couple of tears. There was still a lot of stuff ahead. Good stuff, too. We went into Ruby's Diner at the end of pier, and had breakfast.
JWM
Posted by JWM at 12:49 PM