Bringing It to a Close

Thanks for stopping by. The WFB is my 'whatever I happen to be in to at the moment' corner of the web. I have two other Blogger sites which are far more interesting.
The Lost Canyon Project is the chronicle of my work photographing and cataloging the life's work of my late friend, artist Pete Hampton (1940-2018)

The Lost Era Transcripts is the fruit of the Lost Canyon Project. It is a re-creation in book form of Pete's unfinished master work, The Lost Era. This is a good candidate for the finest work I have ever done.

Bringing It to a Close 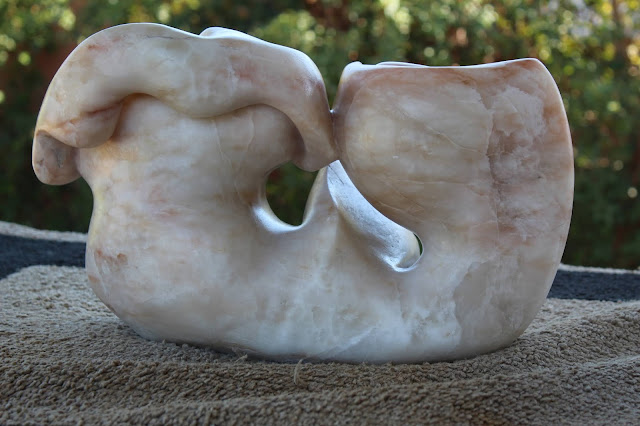 So it looks like I'm on the home stretch done with this piece. Last Tuesday I got started  on the finishing work, sanding out all the tool marks, and stone bruises. The work went much faster than I had anticipated. I had it done by the end of the day.
This makes two stones in a row where I've been working around inconsistent quality in the material. This stone, like the last one I worked, had some firm areas, but most of it is just too mushy to hold much detail. Oddly enough, it can be more difficult working a stone that's too soft, than one that's too hard. I'm beginning to understand why marble is the stone of choice for serious sculpture.
The soft stone takes a gentle touch with the abrasives, but it smooths out quickly. After the second pass wet sanding the carving, I put it on the portable table, and washed it down with the hose. When wet, the stone looks like French vanilla ice cream with caramel streaks. But the wet, glassy finish didn't suit either the material, or the figure. The piece looked better as it began to dry.
I ended up wet sanding  up to only 220 grit, (rather than 2,000) and then rubbing it out with  #000  steel wool, and Simichrome. Then I hand rubbed it with more polish, and the soft cotton rags until I got this satiny, very slightly textured finish.
It's an odd, quirky kind of piece. There's a little story going on here. 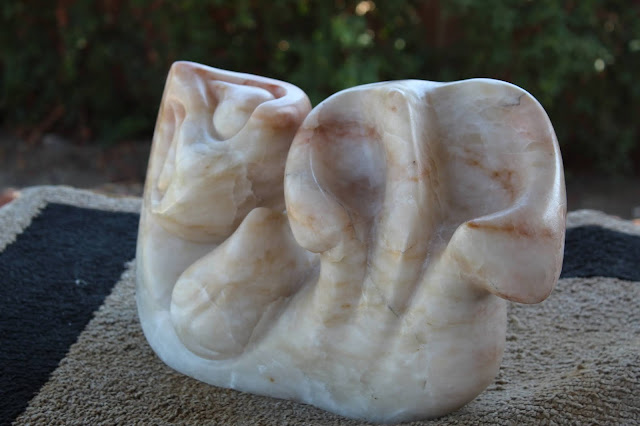 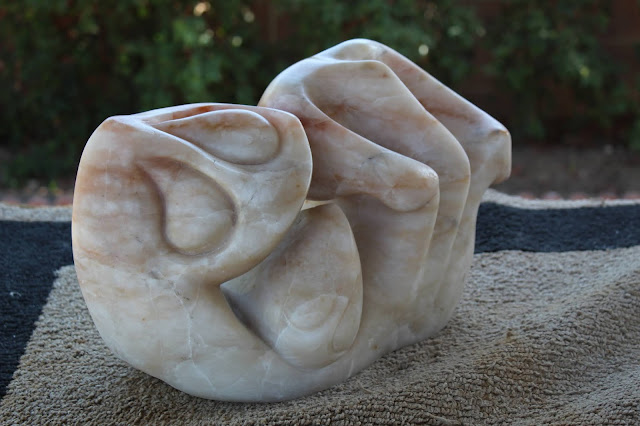 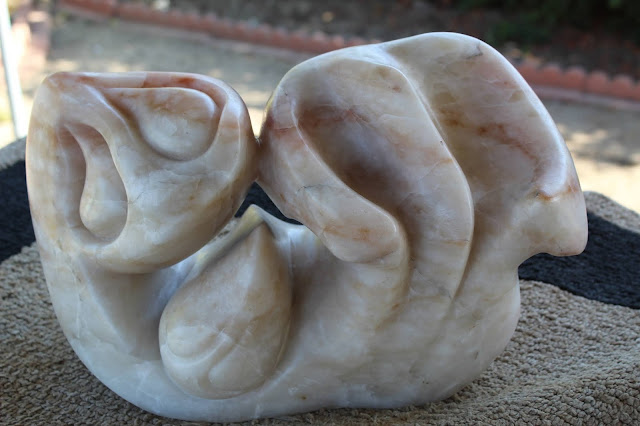 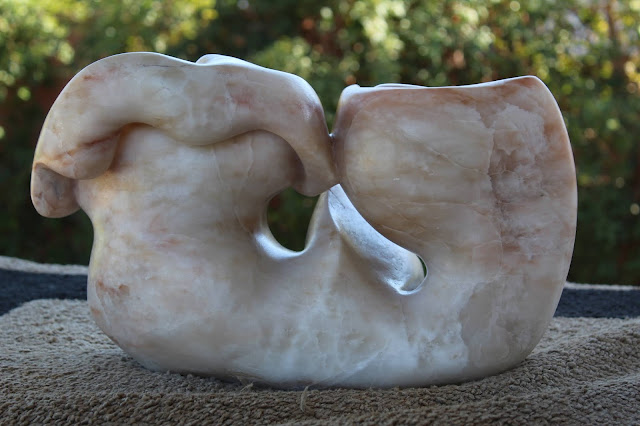 But I don't know quite what it is.
I don't know what it is about finishing a project that leaves me so completely spent, and tired. The physical labor is not exhausting. But this is the fourth stone in a row where it's happened. Tuesday I worked until late afternoon finishing up the stone, and then putting the work area back in order.  I turned in early, but didn't rest Tuesday night at all. Woke up Wednesday morning completely exhausted. That would have been bad enough, but an allergy fit had my nose running like a faucet, literally dripping down my shirt.  Two benadryl left me feeling like a zombie, and then I got no sleep Wednesday night. Couldn't even get a nap Thursday afternoon.
It's Friday morning as I'm sitting here letting the coffee get cold. I'll be back on my feet later. But this seems to be a pattern. Finish up a project, and then I'm on my ass for two days following. Welcome to post-middle age, I guess.
Next up, I'll begin work on the five Anza Borrego stones, beginning with this one: 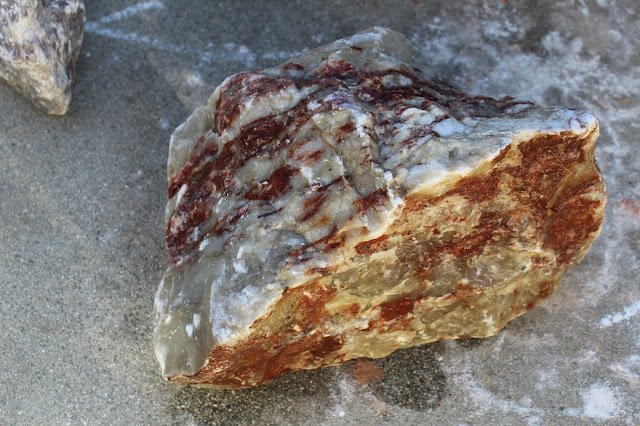 This material is absolutely gorgeous, deep blood red, and milky translucent white when it's all polished up.
This chunk of rock has problems, though. A deep fissure runs along the length of the stone, and the largest surface on the boulder is the flat cut where it was sawn from  a larger piece. 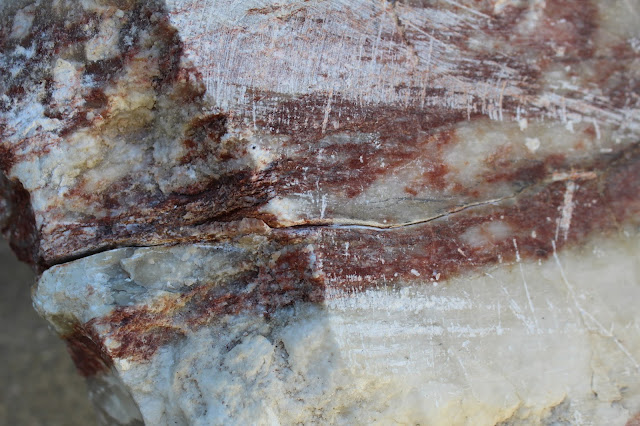 The flat plane is more difficult to work around than the fissure. If I bust out a chunk of the rock, I can compose something cool around the irregular contours of the broken stone. 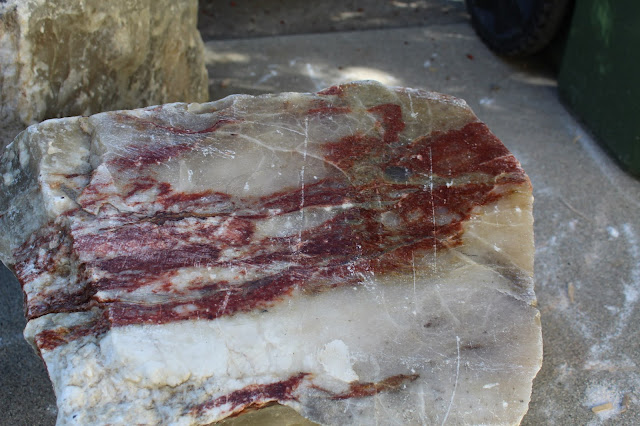 The only way to get rid of flat is to pick out spots that will be high points, and cut the rest way.
I have one very heavy duty masonry chisel that I inherited with my late father's odd-ball tool collection.  I put the blade along the fissure, gave it  three good whacks with the six pound mallet, and just the exact section I had predicted would split, broke out just as I hoped it would. 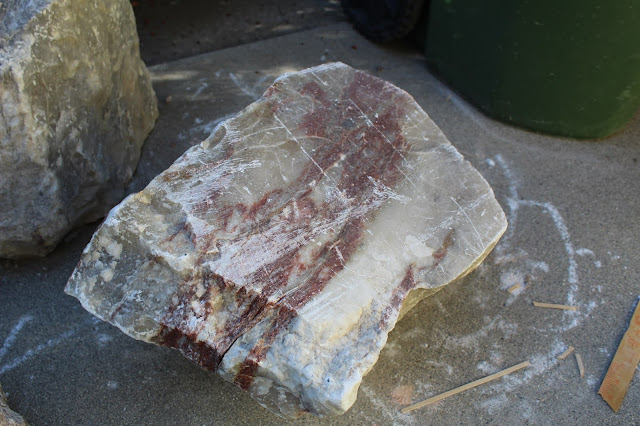 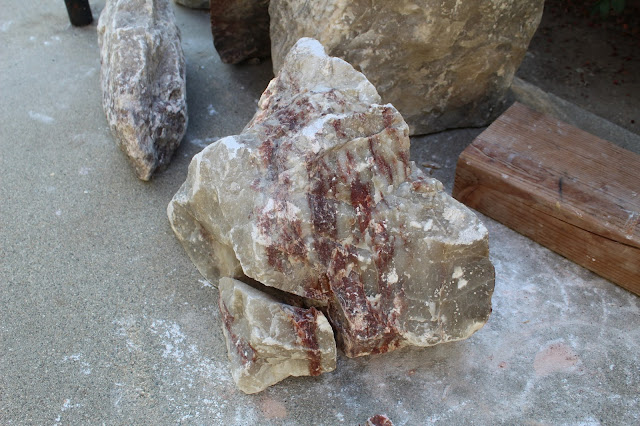 Now here's a mystery. I thought I had completed a piece from what looks like the same stone when I was doing this twenty years ago. I found my old photo album when I was cleaning up the den, Wednesday, and sure enough there was a photo of a small carving done from what looks like the same rock. I gave this, and a bunch of other pieces away at  our wedding in April, 2000. I can't remember who got this piece. More joys of post-middle age, I guess. 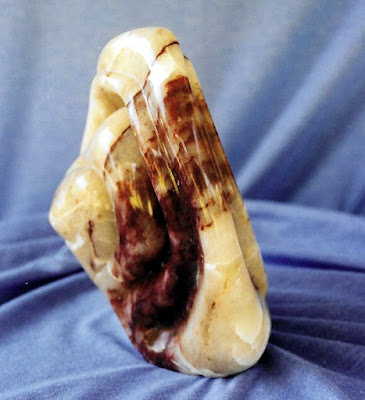 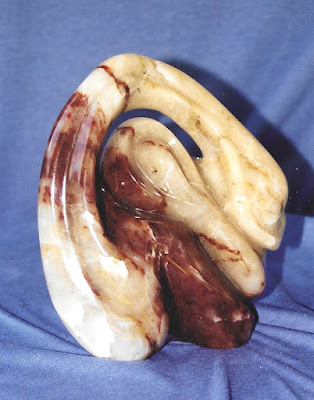 It is quite probable that the stuff came from the same quarry. US Gypsum has been working those beds since 1920. But how likely is it that they'd be pulling the same stone out for over twenty years? I'll probably never know.
Next up is the take-down. I'll drag the big stone out into the yard, bring out the angle grinder, and spit some dust and noise out into the morning. Maybe take a little revenge for the neighbor's tile saw.
Posted by JWM at 6:48 AM