I'm not taking any photos of this part. All I'm doing is drawing pencil lines on a rock. And, truth to tell, I really did not plan on blogging this project, but, well, here we are. Photographing an ongoing project changes the project. It's just like taking a camera along on a familiar hike. Rather than enjoying a holistic experience, all your attention is called away from the big picture, and focused into capturing the perfect photo. Right now, I don't want to break pace to stop and take a picture. Having the camera around is just a distraction.

The burn just owns me right now. The stone is center stage in my mind, crowding out every other thought. It's very like having a melody stuck in your head until it drives you nuts. It's an earworm of silent forms. I have the shapes squirming around in my mind, but they have to be captured, and frozen within the hard confines of the rock on the table. I'm spending upwards of ten hours a day with a pencil and the stone. I'll start again right after breakfast.

Morning begins around three forty five. I get out of bed, and the Skinamalink follows me into the kitchen. He waits quietly while I get the coffee started. The bean grinder gives me enough time to get the tuna out of the ice box, put a couple spoons full in a dish, and set it down for ol' Skinnies.

Buddy the Cat waits in the living room. I sit in the easy chair while the coffee brews, and the old cat hops up on the coffee table for his morning pets and scratches.

I wake Mary up when coffee machine starts to gurgle and slurp. Skinnies waits while I pour the first hot cup, and then he follows me back into the den,  jumps up in my lap and curls up. He's a good ol' cat. He snuggles in with his chin on my left forearm, leaving my hand free enough to hold the cup, and sip at the brew. The cat purrs softly in my lap. The first couple swallows of black  keep me floating above sleep, and open all the channels to the subconscious. I drift for a while before nudging the thought stream into the meditation and prayers that set the tone for the coming day. I'm out back working a little before eight. The cats hang out on the patio with me until the sun gets high enough that they want some shade. They come out from under the bushes, and join me in the gazebo when I take a break.

These are sweet days. Life has been very good to me, and I've been given the added blessing of being acutely aware of just how good. I am profoundly grateful for it. I have no rural redoubt, but I am fortunate to have a modest  tract home in a still decent neighborhood here in So Cal. I have had the rare good fortune to have met the true love of my life. We've had twenty one years of marriage, with scarcely a cross word between us. Our retirement income is, uh-  modest, but we have no debts. As of late, I have made our home into my suburban hermitage.

I stay away from politics and current events on the blog. I'm no expert on anything, and opinions are cheap as pixels. There are already zillions of people with plenty to say about the end of the world as we knew it. I'm writing what follows not as a comment on current events, but as a comment on the effect they've had on me. It is germane to a discussion I'll open later on the whole creative process.

Despite the state “opening up”, half the idiots out there are still slouching along alone on the street with those hideous, filthy, goddamn masks strapped across their muzzles. Worse, they seem to enjoy it. I find the sight almost unbearably depressing. I can't spend much time in public, before I’m living the penultimate scene from the old movie, “Invasion of the Body Snatchers”. I’m one click away from being Kevin McCarthy running in the middle of the road, and screaming hysterically at strangers in traffic. I do not have words for how deeply I loathe this episode in our history.   The cumulative negative energy out there is overwhelming. My ability to cope with it all is as strained as it could be.  But that's enough for now. I'll come back to this later.

Thursday ended well. It was a twelve hour day, but I brought all the arcs, curves, and most of the planes flowing together in harmony. Here's the plan: 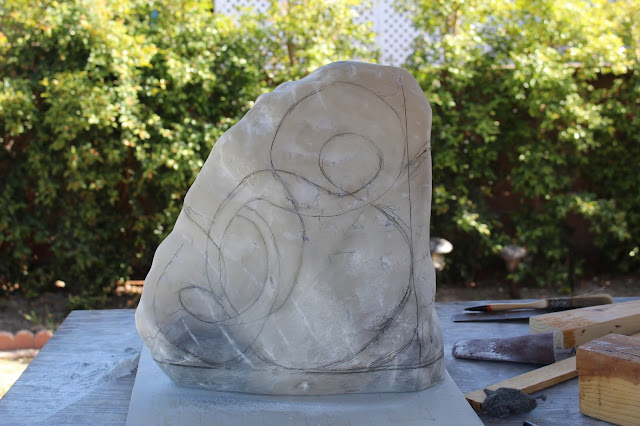 Doesn't look like much, huh? Certainly not like three long days of work. The finished piece will come out more or less, and kind'a sort'a like the lines. The plan always changes once I start. These photos show a couple of problems I'm going to have. There are lots of pitfalls when it comes to crafting a form from an irregularly shaped stone. I'll talk about it in the next post.