Folded Into the Psycloptimogiven. A Salvia Event 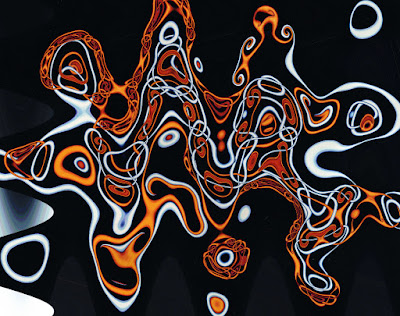 Synchronicity crossed my path some years ago, and led me to a most amazing encounter with Salvia Divinorum. I never read the newspaper, but one morning  I just happened to glance at a headline in the Times about the Diviner’s Sage. I knew by the time I’d finished the article that I was going to try the stuff. I flipped on the computer, and a week or so later I had 25 grams of dried Oaxacan leaf.

Now, I’ve been getting buzzed for a very long time, and I’ve seen (and tried) more than a few “New Organic Highs”. Mostly I’m skeptical. I figure the good plants are already well known, and those that aren’t well known are obscure for a reason. Usually they either don’t work very well, or the effects are more like being poisoned than getting high. So I was half prepared for disappointment when I took the bag of leaf out into the garage.

I packed a fat wad of leaf into the shotgun pipe, torched the bowl, let go of the tube, and took down a big hit. The smoke tasted and smelled just like white sage; it was thin and gaseous, and it went down easy. I let out a big white cloud…

It felt like I’d stuck my finger in a light socket. I never had anything hit so hard or so fast. Every skin cell on my body was twisting in a different direction. I just remembered the punch line to the corniest joke in the world. I was euphoric, weightless, floating, drifting in impossible motions. I closed my eyes, and there were no visuals, but I had the sense of looking into infinite depth. Overall, I had the sensation that I was remembering all this rather than experiencing it. Moments later the event faded out and left me standing a little unsteady on my feet and bowled over in utter amazement. I had done magic. I’d discovered gold. I wanted to jump up and down- run out and tell someone! Oddly enough, though, it did not occur to me to sit down and take another hit. Didn’t even enter my mind. But I was excited all day, because I knew this stuff was the real thing.

As I said before, I’ve been getting high for a long time. Almost everyone I know gave it up decades ago. A few of my old buddies will still take a drink, or a toke, but none of them is interested in hallucinogens. Anyway, my wife’s nephew, Dave and his pals were all in their early twenties, and they loved to party. So I invited them up to Possum Flats, our garage apartment. They showed up some days later with this ridiculous air bong made from a sawed off aluminum baseball bat with a spark plug socket for a bowl. Like I said, they loved to party. Dave left the air bong with me, and went around front to wait for his friends. I was sitting with my wife on the sofa. The bag of dried leaf was open on the coffee table. I was seized by impulse. “I’m going right now,” I said.

I stuffed a wad of leaf into the sparkplug socket bowl, fired the torch, and drew deep on the mouthpiece to fill the chamber. I exhaled a little smoke, torched again, let go of the carburetor and took down a massive hit. This one smacked me hard. It was exactly the same as the first time, but much bigger. The weightlessness, the twisting skin, the odd sense of remembering some kind of corn-ball humor, and everything- everything is in motion, everything begins lifting, twisting, folding. Somehow, in this symphony of movement I manage to tap out the pipe, stuff a second wad of leaf into the bowl, cover the carburetor, light the torch, fire the bowl, draw deep to fill the chamber, exhale (so many things to remember!) fire again, release the carburetor, and draw down a second huge hit of the pungent gaseous smoke. It knocks me back.
Darkness.
How long have I been holding this hit?
Exhale.
Freefall.

It's 1954.
I’m two years old and I'm standing in the kitchen of my grandmother's apartment, basking in the love of her smile. Sunshine through the window above the sink. Soft light on the table. It is so warm, so loving. I cannot read the logo of the box up on the shelf, but it sings in pure and perfect notes of color. Orange and yellow concentric rings radiate throughout the room bathing everything...
My eyes open. The vision and all memory of it vanish.

My eyes close. The vision resumes. It had never been interrupted. It's 1954. I’m two years old and I'm standing in the kitchen of my grandmother's apartment basking in the love of her smile. Sunshine through the window above the sink. Soft light on the table. It is so warm, so loving. It has always been so and always will be. I was here before time. I cannot read the logo of the box up on the shelf, but it is sings in pure and perfect notes of color. Orange and yellow concentric rings radiate throughout the room bathing everything in warm harmonic light, dissolving the room, dissolving time, dissolving me. I am disembodied awareness. I am pure observation.
THE POLES! Two poles of light, rods of infinite length and perfect straightness orbit one another- turning, twisting, tumbling- always changing, yet always maintaining the same everchanging relation to one another. This is the Engine of Creation generating Existence into Being. This is Psycloptimogiven.


It began washing out. My eyes open. HOLY COW! The room was still doing this weird folding thing, but now I had a vague idea of where I was, but not what was happening to me. The word! What was the word? I closed my eyes, and dove back into the rapidly fading vortex. Reaching with my mind like a swimmer in murky water I seize the word, and hold onto it like a treasure. Psycloptimogiven, psycloptimogiven, psy-clop-ti-mo-given…there will be more given… I open my eyes. "HOLY COW!" I shouted out, "IT WAS THE PSYCLOPTIMOGIVEN!"

It was washing out very fast now. Only now was I aware of where I was and what had just happened to me. It was the sage! Tidal waves of astonishment broke over me- as if I’d fallen from an airplane and landed on my feet unhurt.  "Holy Cow!" I shouteded again, and burst out in deep convulsive laughter. Suddenly I was bathed in sweat. I stood up, wobbly, and unsteady on my feet. I had been cleansed, purged, healed. Every negative thought and feeling that I ever had was purged, I was healed of every wound, newly born, cleansed from within by the sacred smoke, and ready to begin my life anew. I walked around the room in circles laughing and saying, “Holy Cow!” over and over again, even though it was an expression I hadn't used in years. The whole thing, from packing the first bowl to re-entry was over and done within fifteen minutes. I was elated- even a little giddy for days after the event.

The session with my wife’s nephew and friends took much less time than I expected, and was not all that successful. (more on this later) I got tired pretty early, went to bed, and slept well. The afterglow lingered for weeks. I was unusually clear headed, at peace, optimistic. The ultimate anti-depressant.

My thoughts on the matter:

1) If the sage likes you, it is a fantastic experience. No matter how you rate a high, Salvia gets 11 out of 10 on the scale. And the afterglow is even better than the event. I had been in a funk- bordering on a depression when I hit the sage, and the event snapped me out of that in a flash. I was in a great, very positive frame of mind for weeks after the event. Paradoxically, however, after I had the experience I felt a powerful reluctance to repeat it. In fact, the next time I tried it I was actually shaking in fear as I went to light up.

2) It's hard to describe this, but what happens to you when you go into a salvia event is real. You’ll remember it all, but when it happens you won’t know where you are, or what is happening to you. It's not like mushrooms, or acid where you’re aware that you’re high, and experiencing the effects of a substance.

3) Unfortunately, not everyone responds to the sage. The trip I described resulted from two big hits (maybe a couple of grams worth) of untreated leaf. That same night I saw two people smoke it till they were blue in the face, and not get a reaction at all. One guy got a mild to moderate event- (wasn’t impressed), and one of the others took down five or more big tokes before getting a reaction which he found distinctly unpleasant. One other guy went deep like I did. He was blown away, but I spoke to him only once after that night.

Thoughts on the matter some years down the pike:
I still have a good stash of salvia. After the night I described above I bought another 100 grams. This was over ten years ago. I’ve kept it in an airtight container with some desiccants. It’s still just as good as the day I got it. I’ve done it only a handful of times after that one night. In subsequent trips I’ve reached the dream vision, but not broken through into that deeper realm. As I said, there is a powerful reluctance to repeat the experience.

What I’ve found recently is that a sort of micro-dosing with salvia has some very positive benefits. I am given to funks and depressions and I have, several times, used the sage as a treatment. I took a few small (~.2 gram) tokes, smoked just enough to feel the tingle, and stopped right there. Each time, for many days after, the anti-depressant effect was profound, and I did not rebound into a funk afterwards. It leaves me unusually clear-headed, optimistic, and generally in that ‘psychedelic’ mindset wherein I’m acutely aware of the beauty that surrounds me, the good things, and many blessings I have in this life.