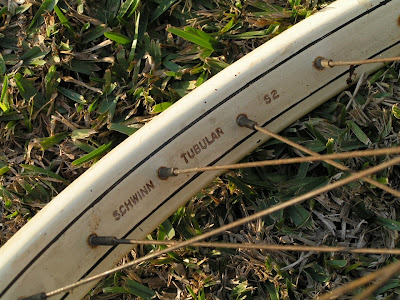 No seat. No fenders. Broken spokes. Rotten tires. Spray-can black paint job. But I knew a Schwinn frame when I saw one, and the locking spring fork, and razorback gooseneck marked it for a high end bike.

"Well", said the old guy. "How much'll ya give me for it?"
"It's missing a lot of stuff," I said. "Do you have any of the parts around here?"
"Well- I don' know... here wait, there's this."
He went over to a workbench, rummaged around in the junk, and came back with a rusty tank half, and the headlight shell, The pot metal shell had been rotted out from battery corrosion. There was a big hole in the top of it, and a large section had pretty much turned to dust. The tank still had the black paint, and yellowed decal. No doubt about it. This rusted old beater had once been the top of the line of the top of the line. It was beyond restoration.
"Well?"
I could pretty much figure was coming next. He'd be sure that this old junker was worth a thousand bucks, or something. As it was, it was good for spare parts, and not much else. Nonetheless, if I bought it, even for more than it was worth, then maybe I'd get a shot at the rest of the stuff he had in the yard. Who knew what could be out there in that pile?
"I'll tell you what," I said. "There's not too much to work with here- best I could offer you for it would be fifty bucks."
"Fifty bucks," he grumbled. "You said these things were worth money. Alright. You can have her for fifty."
I loaded the sorry old wreck into the back of my truck, and headed home. It was Tuesday night, and the gal from the market was waiting at the house when I got back. She wasn't exactly living with me, but she never really went home much these days. Home meant dealing with her daughter, and her mother, and, well- it was more fun over at my place. The kid hated my guts. But that's not part of this story.
"You got this in the mail", she said. Yellow envelope. Green cardboard check. Tax return, and six hundred bucks. "Woo hooo," she exclaimed."We can do some real party there!"
"Uh, yeah- we can at that," I said. Six hundred bucks would buy a load of buzz. And I'd be a liar if I said it didn't sound like fun. But this relationship was nowhere. It was sex and dope. It was an easy getaway for her, and easy sex for me. And I had promised myself no more of this shit one too many times.