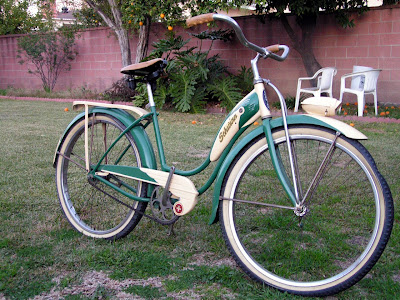 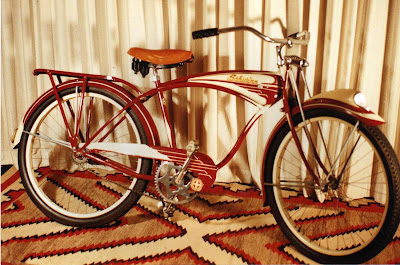 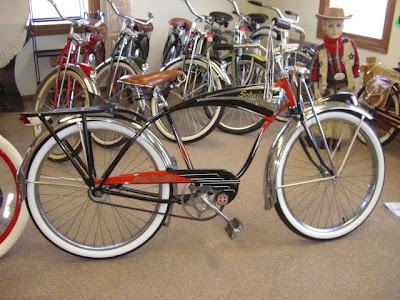 It rained today, and I didn't get any work done on the B-6. I had planned on having all three bikes overhauled in the time it took to write the narrative of how I came to own them, but that didn't quite work out. The Jaguar Project turned out to be more involved than I had anticipated. But then again, make me a list of all the things that work out just the way they were planned. It occurred to me last night that I've made several references to the Schwinn Black Phantom, but most people outside of the antique and classic bike scene have never seen one. This picture came from Memory Lane Classics in Grand Rapids Ohio. Another great source for pictures and information about old bikes is Dave's Vintage Bicycles. They have an incredible gallery of old bike pic's, and it's worth some time to just go browsing through the folders. Beware, though. You don't have to come in contact with one of these things to get Old Bike Fever. You can catch a wallet draining case of it from pictures alone. The photo of the B-6 was taken in '93 when it was serving time as a living room decoration, and if you look closely at the shot of the Starlet, you'll notice that it's looking pretty dingy, the pedals are off the bike, and the tires are flat. I'll get to it soon enough, and then the whole fleet will be overhauled, and ready to ride.

It's a peculiar sort task- composing a narrative wherein the main character behaves in a -shall we say- less than admirable manner. Particularly when the main character is me. I could, at this point, sling some pious crap about 'turning my life around' back then, but that isn't part of this story. Just for the record, though, that was the end of my affair with the gal from the market. Yeah, she had her problems, but I behaved like a world class asshole, and she really didn't deserve to be treated like that. Some years later I looked her up and made a formal apology for my behavior. I did give cocaine the boot later in 1980, and to this day the very thought of it makes me sick. It's the uncontested heavyweight champion of dogshit drugs.

But back to the final notes on The Great Bike Hunt.
I patched up the damaged headlight shell with fiberglass, and fabricated a light to go inside. Not original equipment, but it would do. Now, with e-bay, Craig's list, and on-line collectors' forums at my fingertips it's only a matter of time before I find the original light tray that came with the machine. I mentioned that the B-6 was sporting chrome plated fenders when I bought it. The picture shows it as it is today, with correct fenders matching the rest of the bike. The fenders came to me in the last, and most improbable coincidence of all.
It was 1983. I had quit the utility company, and started the long, tedious march through my college education. The Starlet, and the B-6 were under wraps in a storage shed in my Dad's back yard. I kept the Jaguar out for occasional rides. It was Spring Break, and I was on Main Street in Huntington Beach just a block away from the intersection where I first spotted the Autocycle that lit the fuse on this whole obsession to begin with. Old Schwinns were a fad with the surfing scene, and one of the small shops had a dusty Black Phantom sitting in the window. I stopped to look, and a moment later another guy stood beside me checking out the Phantom. I always talk to strangers.
"Awesome old bike, huh?" I said.
"It sure is," he answered. "I have one like it at home. Only problem with mine is that it has painted fenders that belong on a maroon and cream B-6. I sure wish I could find the chrome ones that went with the bike."

(epilogue: The coolest bike ever built)